In July of 2013 my daughter and I set out on a camping and climbing trip to Gunsight Lake. We would meet my friend Dustin at camp on Gunsight Lake where we would base our climb of Mt. Jackson. The weather forecast was ideal and we were excited to get on top of some glaciers.

Gunsight Lake is a wonderful back country campground. It is set up like the other back country sites but the proximity to the lake and the views from the campground make this one of my favorite destinations. The hike in to the lake is only 6.5 miles and the elevation gain is a gradual 1500 ft. And there is plenty to see on the way in.

After a couple miles of slow descent from the trail head we found Deadwood Falls. Here the creek creates some impressive erosive features on the colorful rocks as it hammers it’s way through the surrounding walls. This is a popular spot for hikers to stop and take photos. Remember that drowning is the leading cause of death in GNP so always be careful around slippery rocks and moving water.

The initial descent ended when we reached the St. Mary River. Here we found wetlands and meadows ideal for wildlife viewing. This river basin is prime country for moose and bear and hikers usually have sightings of them more often than not. A few prominent peaks loomed around us including Citadel, Dusty Star, and Going-to-the-Sun.

About four miles in we found the trail branching off to Florence Falls. We decided that would be a good place to stop and eat lunch. From the main trail it was only about one mile to the falls and absolutely worth the extra effort. And no matter what you’ve packed for lunch it’s going to taste a million times better sitting next to those falls!

Arriving at the lake on a hot July afternoon we were anxious to go for a swim and cool off. We quickly set up our tents and headed for the lake shore. The water was cold but not intolerable. We took a brief swim, basked in the warmth of the sun, and enjoyed the views of Mt. Jackson, Gunsight Mountain, Blackfoot Mountain, and Mt. Logan.

We returned to camp and headed to the food-prep area to make our dinner. Another camper arrived to join us, short of breath and laughing. He had just chased down a deer that ran off with one of his trekking poles. He was able to recover the pole and show us the chewed up grip with deer slobber dripping off it. The deer and marmots here are notorious for being a nuisance like that. They love the salt on grips of poles and soles of shoes so NEVER leave anything out on the ground or within reach of tall deer. I have my own tattered pole handles and flips flops to attest to the determination of these critters.

The swim was refreshing

We went to bed early because we had a big day ahead of us. We planned to climb Mt. Jackson, the 4th of the six 10,000 ft peaks in Glacier, behind Cleveland, Stimson, and Kintla. The climb from the campground would entail just under 5,000 ft elevation gain over a few miles to reach the summit at 10,052 ft. With bellies full of complex carbohydrates we slept soundly with visions of glaciers, mountains, and sparkling waters filling our dreams.

Crossing the foot of the lake 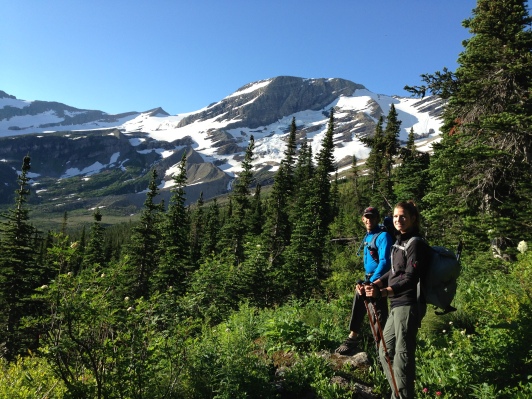 The next morning we awoke early and headed across the suspension bridge on the trail over to Jackson Glacier. From there we branched off-trail and began the ascent of the mountain. My daughter got a little spooked at some of the exposure so when we took a break at 8,400 feet she remained on the ridge while Dustin and I continued to the summit. The remaining 1,500 ft was an easy class 2 and 3 scramble to the top. 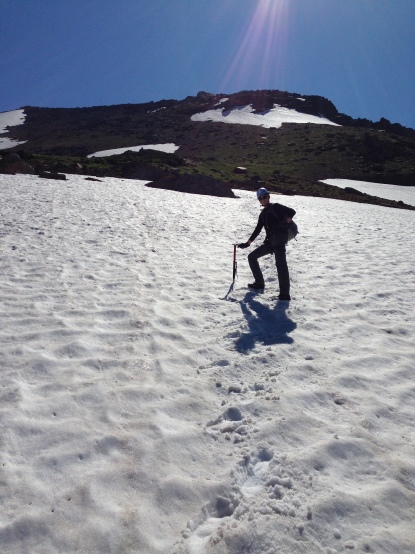 It was thrilling to be on the top of Mt. Jackson. On the top we had spectacular 360 degree views. We had also gained a view of the Harrison Glacier. While we were taking summit photos we heard the incredible sound of a monstrous ice chunk cleaving apart from Jackson Glacier and crashing down the cliffs below. Unfortunately we were only able to hear the event and not see it. I would say the sound was similar to a sonic boom followed by continuous thunder with a jet flying overhead, all in about 10 seconds total.

The name of the mountain was changed from a tribal term in 1891 by G.B. Grinnell. The previous name was “Sixikaikoan” which meant Blackfeet Man. According to Jack Holterman in his book Place Names of Glacier National Park this may be the peak that inspired Grinnell with the term “Crown of the Continent” as this is the only 10k peak on the continental divide.

Ridgewalk to the summit

Gunsight Lake is a fantastic destination for a day hike, overnight camp, or as part of the Gunsight Pass trail that goes from the Jackson Glacier Overlook to Sperry Chalet and down to Lake McDonald Lodge (about 20 miles total). This hike can be done from either direction depending on your itinerary. There are waterfalls along the trail and long cascades near the head of the lake. Flora and Fauna are also typically abundant. Don’t forget your bear spray, bug spray, fishing pole and camera.

Father, Physician Assistant, Adventurer, lover of all things Glacier. Chris is an avid hiker, climber, and backpacker in Glacier National Park. He is a Wilderness Volunteer doing boat patrol, bike patrol and wilderness patrol. He is also a co-author for the guide book series "Climb Glacier National Park" by Blake Passmore. He has climbed about over 100 peaks in the park. View all posts by Chris Rost